How to enjoy the French Riviera 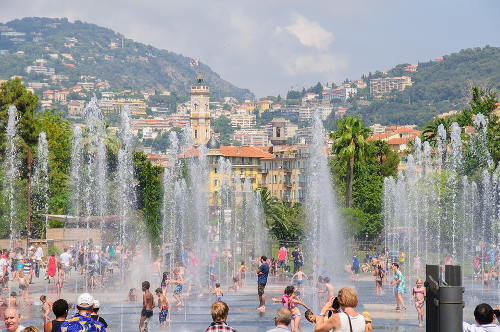 The world-famous Cannes film festival takes place every May in the stylish and glamorous seaside resort in the south of France. But if you visit the Cote d'Azur at other times of the year, this almost legendary stretch of the French coast offers plenty to see and do. Mention the Cote d'Azur, or French Riviera, to someone, and it conjures up a picture of beautiful beaches, stylish resorts, movie stars and luxury yachts. This part of the French coast, which stretches between Toulon and the Italian border, is home to some of France's most famous resorts and most beautiful beaches.

Nice
Most visitors to the Cote d'Azur concentrate on the larger resorts of Nice, Cannes and Monte Carlo. Many people begin their trip in Nice which has the region's largest airport and easy access to the rest of the Cote d'Azur, as well as nearby Italy. For those of us who aren't movie stars, Nice is a little bit less glamorous and less expensive than some of the other resorts. The main attraction in Nice is the old town with its narrow winding streets, colorful eating places, and the weekly flower market.

Cannes
Apart from its annual film festival, Cannes is famous for its beautiful curving seafront, known as the Promenade de la Croisette, lined with flowers and palm trees. Cannes also makes a good base for taking a ferry ride to the nearby Lerins Islands, on one of which you can see the cell where the "Man in the Iron Mask" was imprisoned.

Monaco
The principality of Monaco is one of the richest square miles on earth and Europe's second smallest country. The most famous attraction is the casino, where vast fortunes have been won and lost over the years. Monaco also has an excellent museum of oceanography; with over 90 tanks of fish and sea creatures, it's one of the best in Europe. Motor racing fans can also walk the route of the Monaco Grand Prix, which winds its way through the city.

Places to relax
The above-mentioned towns can be extremely crowded during the summer, and you can often find a more relaxed atmosphere in some of the smaller towns and villages along the coast. The beaches are noticeably less crowded too if you visit during the spring or fall. Antibes is a charming town which sits on the site of a 4th century BC Greek city and the excellent museum of History and Archaeology displays Greek, Roman, and Etruscan artifacts. There is also a Picasso museum, paying tribute to the painter who lived in the town during the 1940s. Another small town worth a visit is Villefranche-Sur-Mer with its narrow cobblestone streets, the castle overlooking the village and bustling waterfront. A highlight of any visit here is a trip to the Chapel of St Pierre with its spectacular interior.

Inland from the coast
The Cote d'Azur is justifiably famous for its beaches. But if you venture inland, you'll discover some of France's loveliest scenery. There are many charming villages in the hills overlooking the Mediterranean that are worth a visit. St. Paul is full of shops selling work by local artists and craftsmen; Vence has a bustling daily market and a cathedral with lovely stained glass windows.


People have been flocking to the Cote d'Azur for over a century for the glamour, and simply to see and be seen. But away from the expensive yachts and boutiques, you will find one of the loveliest parts of France - it's no wonder that many of the greatest artists of all time, including Matisse, Picasso and Chagall chose to paint here.