The remarkable health benefits of garlic 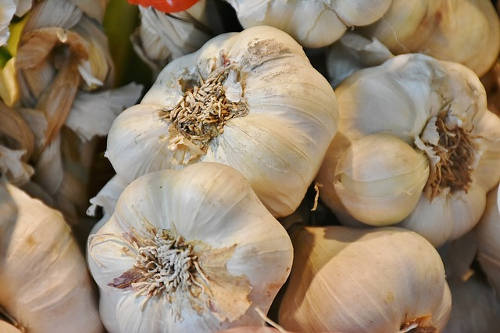 Garlic is one of the most popular cultivated plants in the world, having been used for more than 5,000 years both as a spice and medicine. Garlic is rich in potassium, selenium, manganese, copper, and vitamin B6. Its active ingredient, allicin, gives it its pungent smell and is thought to be responsible for some of the remarkable medicinal properties of garlic. Here are five of the most important of them:

1. It's strongly antimicrobial
Allicin has been shown to kill both gram-negative and gram-positive bacteria, including antibiotic-resistant strains of E. coli. It has also been proven effective against fungi such as Candida albicans and protozoans such as Giardia lamblia. Allicin is thought to work so well against microbes and parasites because its sulfur group interferes with their enzymes.

2. It protects the heart
Freshly crushed garlic contains hydrogen sulfide, a compound that in small doses acts as a signaling molecule and dilates blood vessels. Studies have shown that rats recovered better from heart attacks when they were given fresh garlic, because the hydrogen sulfide helped restore blood flow to the aorta, thus minimizing heart damage.

3. It destroys free radicals
Free radicals are substances which can cause cancer and neurological diseases, and speed up aging. In addition to allicin, several compounds in garlic, including alliin, allyl cysteine, and allyl disulfide, were found to have strong antioxidant activity and were able to scavenge different free radicals.

4. It reduces lipid serum levels
Several studies have shown serum cholesterol and triglycerides levels are reduced in people that consumed garlic or garlic supplements, compared to the controls. This effect occurred even if the amount of physical activity of the participants remained unchanged.

5. It kills cancer cells
Allicin was found to inhibit the growth of cancer cells in both mice and humans. Allicin works against cancer by activating caspase enzymes in the diseased cells, essentially causing them to commit suicide. It was also shown that people who consume more garlic have a decreased risk of lung, cervical, and prostate cancer.

6. It minimizes alcohol-mediated liver damage
Studies have shown that garlic can both prevent and reverse already-existent liver injury in alcohol-intoxicated mice. The effect is due to the strong antioxidant properties of diallyl disulfide, an organosulfur compound found in garlic, that can protect hepatic cells from stress and minimize liver damage.

7. It may help to prevent premature birth
A Norwegian study investigated the correlation between preterm delivery (PTD) and garlic consumption in over 180,000 women and found that garlic can reduce the risk of PTD. Since microbial infections greatly increase the chance of premature births, the effect of garlic on PTD is thought to be due to its strong antimicrobial effect.


Garlic, a plant in the same family as leeks, onions, and shallots, has been used for thousands of years as food and medicine. Research suggests that garlic can kill microbes, reduce the risk of cancer, and protect the heart, being a veritable superfood. If you choose to benefit from the properties of garlic, it is best to consume it raw, as cooking destroy many of its active organosulfur compounds.

Related Links: Find below further links on topics related to garlic;
More on the health benefits of garlic
More information on allicin an ingredient in garlic
Information on garlics antibiotic properties
More on garlics positive effects on the heart
Some recipes that incorparate garlic